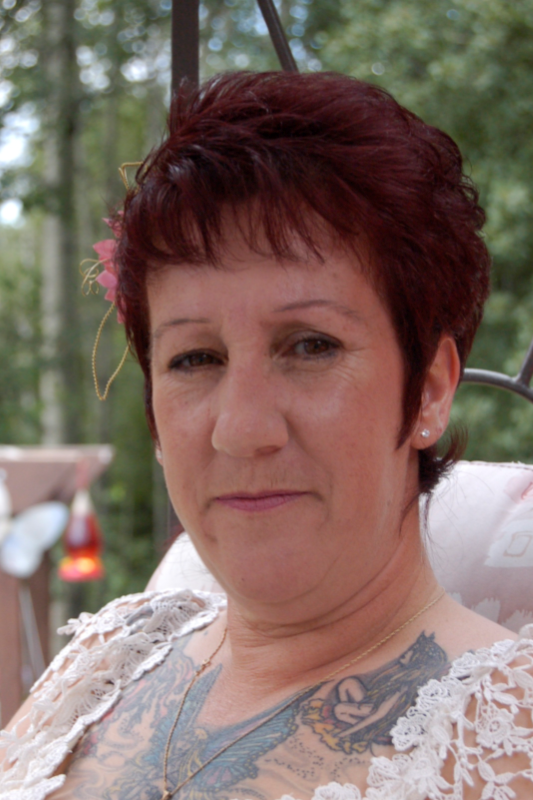 Gail is survived by her husband, Bill Conlon and her three children, Christopher Chapates, Lindsey Chapates and Derek Chapates, her grandchildren Kate and Emily Chapates, Aubrey Hamilton and Brynley Perusse.

When Gail married me she had no idea what was in store for her. I had no idea, but we thought we did. After a few years she was unable to ignore the injuries I had from my military service and that put her on a track that would lead straight to Veterans Affairs Canada. I’m pretty sure they felt that they had met their match because she was relentless in her quest to get me the benefits she believed I deserved.

After we had moved to Ignace she felt that I should have a dog. She’s not the first person to have had that idea, but she was the one who really brought it home in a meaningful way. Our first dog’s name was Thunder, a biscuit coloured part husky and total hooligan! She was quick to take notice of the benefit of having a dog and how it lifted my spirits and helped to improve my overall health. All of that amplified when we got our second Husky, Storm’. The two of them were twice the fun.

All of that is in the background now, but it became her own ‘informal study’ which provided her with great insight. From 2010 onward many people across Canada were discovering the same thing and eventually, around 2019, Veterans Affairs published their findings which confirmed what many of us had already discovered.

But Gail wasn’t quite where she needed to be until she discovered Quilts of Valour. In the opinions of people who knew her, Gail was a remarkable quilter and with her insight into veterans issues she became a volunteer. As I was watching her become more and more involved I was seeing her finding a renewed sense of purpose and direction and I couldn’t have been more proud of the work that she was doing. I was more than blessed to have her in my life, watching her go through this journey which resulted in selfless giving to others without expectation of anything in return.

She made our house into a home filled with love and very creative and amazing quiltings. Our kids were our dogs and the one she was most fond of is here by my side, watching the door for Mommy to come home.

There will be no visitation as cremation has taken place.

A Celebration of Life will take place at a later date.

Donations may be made to Quilts of Valour at www.quiltsofvalour.ca/donate or through the Dryden Community Funeral Home, 249 Grand Trunk Avenue, Dryden, ON P8N 2X3